Developers – Try to build the code

Testers – Try to break/crack the code

The Indian IT industry is mostly services based industry which relies mostly on two types of jobs: software development and software testing (Quality Assurance). There are other streams too, but those are out of the scope of this discussion. We'll only focus on Testing vs. Development. 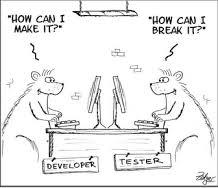 Software testing is process used to identify the correctness completeness and quality of the developed computer software. It includes a set of activities conducted with the intent of finding errors in software so that it could be corrected before product released to the end users. In simple words software testing is an activity to check whether actual results match the expected results and to ensure that software system is defect free.

Software Developers(or computer programmers) are the brains behind the design, installation, testing and maintenance of software systems. Much more than just playing around with codes, they play an important part in making a business more efficient and helping to provide a better IT service.

Behind every great software developer, there is an equally great Software Tester. Once a product reaches a certain point in its development the developers must hand it over to the tester to see if it works (or doesn't work).Testing plays an important role in the development of new IT programmes.

Testers are the troublemakers

Almost everywhere developers consider testers as the troublemakers. Actually it’s not their fault, no one like to hear faults in his/her own code. And same thing testers are doing, of course intention behind that is to deliver quality output to client. Constantly there is bitterness at some point in the game between these two roles.

Developers are not good testers

How to make understanding relationship between testers and developers?

Ultimately Both Will Become Managers

Unfortunately or fortunately every promotion will take you away from your technical expertise. Ultimately both will become managers and will mostly use Microsoft Outlook, Power Point and Excel Sheets no matter which stream (development or testing) they belonged to. 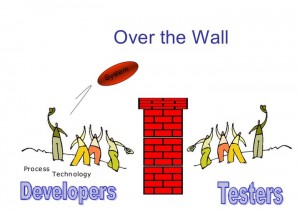 Bottom Line: Don't form opinions or take decisions based on what people say. Most people are not at all exposed to the IT industry or just one of testing or development. Do your own research, gather information on your own from well informed people.

Why you Should Learn Web Development?

Programming as a Career