THE AGE OF CLOUD COMPUTING

The Revolution of Cloud Computing:

Now a day’s term cloud is often used by every techno Greek around you but No one really knows what is a Cloud or Cloud Computing let us solve your doubt first Before going Into depth of it.

Now as we discussed what basically a cloud or cloud computing is, let’s discuss further:

The Main reason behind the popularity of cloud computing is due to increased computer processing power available to humankind with decreased cost of infrastructure for implementation of the cloud.

How the Name cloud Come into existence?

The term “the cloud” has become a shorthand way to refer to cloud computing infrastructure. The term came from the cloud symbol that network engineers used on network diagrams to represent the unknown (to them) segments of a network. Marketers have further popularized the phrase “in the cloud” to refer to software, platforms and infrastructure that are sold “as a service”, i.e. remotely through the Internet. Typically, the seller has actual energy-consuming servers which host products and services from a remote location, so end-users don’t have to; they can simply log on to the network without installing anything. The major models of cloud computing service are known as software as a service, platform as a service, and infrastructure as a service.

Let’s go way behind in 1950’s where the foundation was laid.

The concept of cloud was underlying when large scale mainframes are seen as the future of computing as these can be accessed via terminals and thin clients computers for their usage to do efficient utilization of mainframe computers. The practice of sharing CPU time on a mainframe became known in the industry as time-sharing systems.

John McCarthy opined in the 1960s that “computation may someday be organized as a public utility.

Other scholars have shown that cloud computing roots go all the way back to the 1950s when scientist Herb Grosch (the author of Grosch’s law) postulated that the entire world would operate on dumb terminals powered by about 15 large data centers.Due to the expense of these powerful computers, many corporations and other entities could avail themselves of computing capability through time-sharing and several organizations.

cloud computing has developed along a number of lines, with Web 2.0 being the most recent evolution. However, since the internet only started to offer significant bandwidth in the nineties, cloud computing for the masses has been something of a late developer. 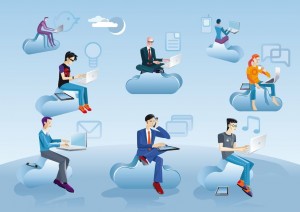 The Era of Change in Computing Technology 1990’s

In the 1990s, telecommunications companies, who previously offered primarily dedicated point-to-point data circuits, began offering virtual private network (VPN) services with comparable quality of service, but at a lower cost. By switching traffic as they saw fit to balance server use, they could use overall network bandwidth more effectively. They began to use the cloud symbol to denote the demarcation point between what the providers was responsible for and what users were responsible for. Cloud computing extends this boundary to cover servers as well as the network infrastructure.

As computers became more prevalent, scientists and technologists explored ways to make large-scale computing power available to more users through time-sharing, experimenting with algorithms to provide the optimal use of the infrastructure, platform and applications which prioritized the CPU and efficiency for the end users.

One of the first milestones in cloud computing history was the arrival of Salesforce.com in 1999, which pioneered the concept of delivering enterprise applications via a simple website. The services firm paved the way for both specialist and mainstream software firms to deliver applications over the internet.

Changes in cloud Computing infrastructure from 2000 to Present

The next development was Amazon Web Services in 2002, which provided a suite of cloud-based services including storage, computation and even human intelligence through the Amazon Mechanical Turk.

In 2006, Amazon launched its Elastic Compute cloud (EC2) as a commercial web service that allows small companies and individuals to rent computers on which to run their own computer applications.”Amazon EC2/S3 was the first widely accessible cloud computing infrastructure service,

Another big milestone came in 2009, as Web 2.0 hit its stride, and Google and others started to offer browser-based enterprise applications, though services such as Google Apps.

The most important contribution to cloud computing has been the emergence of “killer apps” from leading technology giants such as Microsoft and Google. When these companies deliver services in a way that is reliable and easy to consume, the knock-on effect to the industry as a whole is a wider general acceptance of online services,”

Other key factors that have enabled cloud computing to evolve include the maturing of virtualization technology, the development of universal high-speed bandwidth, and universal software interoperability standards.

After Knowing the History behind the Development/evolution of cloud let Start with service category of Cloud system:

A cloud service has three distinct characteristics that differentiate it from traditional hosting.

Now let’s discuss service categories one by one: 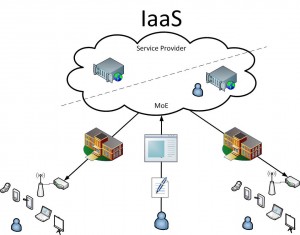 Is the most basic cloud-service model, providers of IaaS offer computers – physical or (more often) virtual machines – and other resources. (A hypervisor, such as Xen, Oracle Virtual Box, KVM, VMware ESX/ESXi, or Hyper-V runs the virtual machines as guests. Pools of hypervisors within the cloud operational support-system can support large numbers of virtual machines and the ability to scale services up and down according to customers’ varying requirements.) IaaS clouds often offer additional resources such as a virtual-machine disk image library, raw block storage, and file or object storage, firewalls, load balancers, IP addresses, virtual local area networks (VLANs), and software bundles. IaaS-cloud providers supply these resources on-demand from their large pools installed in data centers

ü Platform as a service (PaaS): Is a cloud computing service that provides a computing platform and a solution stack as a service. In this, the consumer creates an application or service using tools and/or libraries from the provider. The consumer also controls software deployment and configuration settings. The provider provides the networks, servers, storage, and other services that are required to host the consumer’s application. PaaS offerings facilitate the deployment of applications or services without the cost and complexity of buying and managing the underlying hardware and software and provisioning hosting capabilities. All “as-a-service” offerings are characterized as providing low initial cost, incremental cost as your service usage grows, self-service, best practices built-in, resource sharing, automated deployment, management services, lifecycle management, reuse. PaaS provides these capabilities for application and service development. 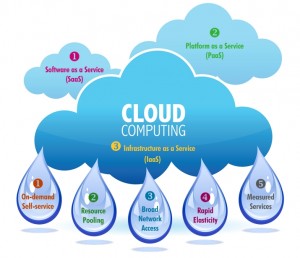 ü Software as a service (SaaS):is a software licensing and delivery model in which software is licensed on a subscription basis and is centrally hosted on the cloud by independent software vendors (ISVs) or application service providers (ASPs). It is sometimes referred to as “service(s) as a software substitute” (SaaSS) or “on-demand software”. SaaS is typically accessed by users using a thin client via a web browser. SaaS has become a common delivery model for many business applications, including office & messaging software, DBMS software, management software, CAD software, dDevelopment software, gamification, virtualization, accounting, collaboration, customer relationship management (CRM), management information systems (MIS), enterprise resource planning (ERP), invoicing, human resource management (HRM), content management (CM) and service desk management. SaaS has been incorporated into the strategy of all leading enterprise software companies. One of the biggest selling points for these companies is the potential to reduce IT support costs by outsourcing hardware and software maintenance and support to the SaaS provider

Private cloud: Private cloud is cloud infrastructure operated solely for a single organization, whether managed internally or by a third-party, and hosted either internally or externally. Undertaking a private cloud project requires a significant level and degree of engagement to virtualize the business environment, and requires the organization to reevaluate decisions about existing resources. When done right, it can improve business, but every step in the project raises security issues that must be addressed to prevent serious vulnerabilities. Self-run data centers are generally capital intensive.

Partner cloud: Partner cloudis a cloud infrastructure operated by an outsource Partner for an organization it provides a significant level of virtualization the business environment. It is less capital intensive then the private one.

Public cloud: A cloud is called a “public cloud” when the services are rendered over a network that is open for public use. Public cloud services may be free or offered on a pay-per-usage model Technically there may be little or no difference between public and private cloud architecture, however, security consideration may be substantially different for services (applications, storage, and other resources) that are made available by a service provider for a public audience and when communication is effected over a non-trusted network. Generally, public cloud service providers like Amazon AWS, Microsoft and Google own and operate the infrastructure at their data center and offer access only via Internet (direct connectivity is not offered)

Community cloud: Community cloud shares infrastructure between several organizations from a specific community with common concerns (security, compliance, jurisdiction, etc.), whether managed internally or by a third-party, and either hosted internally or externally. The costs are spread over fewer users than a public cloud (but more than a private cloud), so only some of the cost savings potential of cloud computing are realized.

Hybrid cloud: Hybrid cloud is a composition of two or more clouds (private, community or public) that remain distinct entities but are bound together, offering the benefits of multiple deployment models. Hybrid cloud can also mean the ability to connect collocation, managed and/or dedicated services with cloud resources

Distributed cloud: Cloud computing can also be provided by a distributed set of machines that are running at different locations, while still connected to a single network or hub service. Examples of this include distributed computing platforms such as BOINC and Folding@Home. An interesting attempt in such direction is Cloud@Home, aiming at implementing cloud computing provisioning model on top of voluntarily shared resources.

The main issue with cloud computing environment is security of data Privacy as our data is on an remote server available to access form any where any time it may also lead to the security issues in which the Data protection May be violated by unauthorized access which may lead to loss of data and information which may cause huge losses. 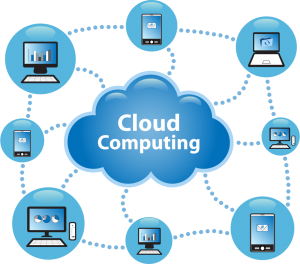 To user to access their data any where any time as the increase in bandwidth and decrease in infrastructure costs.

The development root was in way back 1950’s but in 1990’s it started rapidly and companies like google,amazon, IBM, Oracle Cloud, Rackspace, Salesforce, Zoho and Microsoft started cloud services.

Cloud is divided into categories according to services that they provides

Data or information is very valuable for user and security is the major concern with the implementation of the cloud as the data is available on server the data is high venerable as compare to the local system architecture so the implementation must be done in such away that leads it to be a secure and powerful tool to use in future.

Looking for A DREAM CAREER in CLOUD COMPUTING

Is Cloud and Virtualization Are Same Thing?

Cloud Computing: Reasons Why Cloud Is Secure For Keeping Data